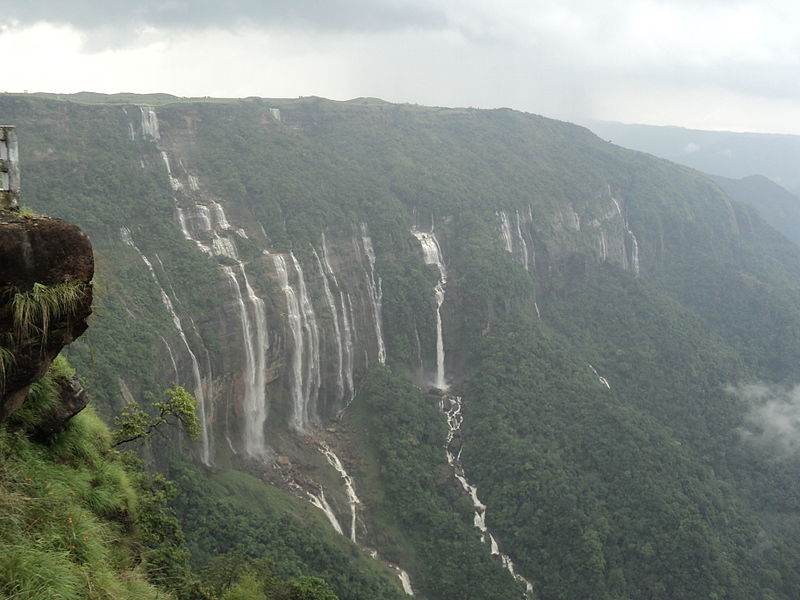 The highest point in the state of Meghalaya provides a scenic view of the capital city, Shillong. Shillong, the Scotland of East, has gained a global reputation for its large number of waterfalls. A memorable spot for trekking, picnic and bird-watching. The U-Shillong site, at the top of the peak, is considered to be sacred and a ritual is performed there during spring. A beautiful lake which is surrounded by lush green Khashi Hills. Also known as Bara Pani, the lake is a part of a dam constructed as a first hydel project in North East India. The lake has become very famous among tourists as a result of activities like boating, Water Cycling, scooting and lots more. One of the top projects of bio-engineering till date, they are made from the aerial roots of rubber fig trees by Khasi and Jaintia peoples. These bridges are said to have a tendency to last over 500 years. The most famous living root bridge is in the village Nongrait, located below Cherrapunji, which is credited to be amongst the wettest place in the world. Lying 12Km away from the main city of Cherrapunji, this park is very famous for its natural picturesque views. One can get a glimpse of the eye-catching Kynrem Falls that flows in three levels. Along with that, there are two bridges which provide a mesmerizing view of lush green valleys and plains. However, the most fascinating part is the views of the Bangladesh plains. It is located very near to the Khoh Ramrah Rock, commonly known as the Shiva Rock. It is a popular giant rock. One of the most famous falls of Cherrapunji, the fall has a height of over 90 m. It is believed that this fall got its name Thlen from a demon giant python, who was killed by a huge stone very near to the fall. Some marks are still there on the stone on which the animal was killed. The main attraction of this fall is natural rock carvings. Being awarded for being the cleanest village in the whole of Asia, the village is popularly regarded as “God’s Own Garden”. Presently, the only village in India which has a 100% literacy rate and functional toilets at all the houses. The bamboo dustbins are there throughout the village. Plastics is banned and smoking is prohibited. One can visit the 85m tall sky view tower, made of bamboo, from where he can get a majestic view. One can also visit the delightful Mawlynoog waterfalls. Honestly, everyone would have a unique experience in this tine and beautiful village. It is a famous museum located in Shillong. It provides a glimpse of rich and multi-cultural lifestyles of the indigenous people of North – East India. It has a collection of a wide range of traditional artwork, handicrafts, photographs, paintings, ornamentations and lots more. It is considered to be the largest museum in the whole of Asia.