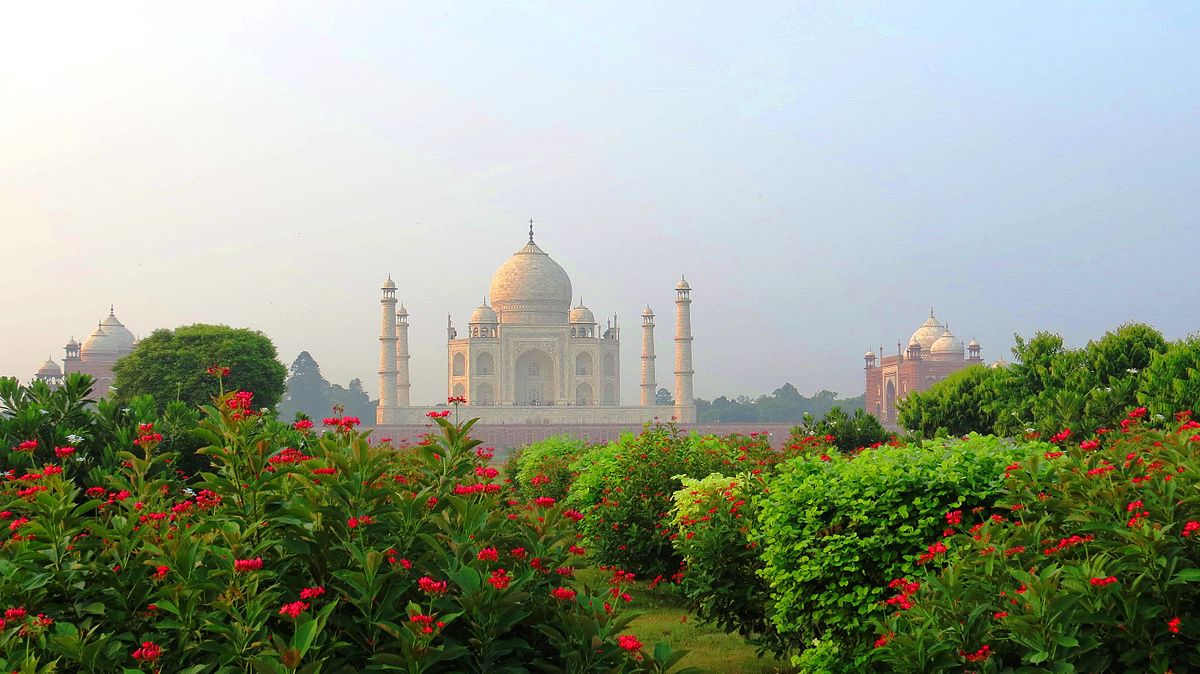 Taj Mahal is built in 1648  with the white Marble it is located on the bank of the Yamuna in Agra. Shah Jahan Build up Taj Mahal to his wife Mumtaz Mahal. Taj Mahal comes under the UNESCO World Heritage Site in 1983. Tajmahal also comes in the World 7 wonder list. Every year millions of people come across the worldwide country to visit the taj mahal also Indian visitors come in huge quantity to visit this place because Taj Mahal has a special place in India history.

it is called the best design of Mughal time. There is no air traffic line upon the Taj Mahal also drones are banned in this area of Taj Mahal. Taj Mahal gives goosebumps views to tourist and there are the river on its backside and museum and some other places included in Taj Mahal. Agara fort has a special connection with Indian politics and history. it was the capital and main residence of Mughal to 1638 until it was shifted Agra to Delhi. Agra fort built with the red Marble and stones. Agra Fort is 2.5 km West from the Taj Mahal. Fort was Built by the Mughal emperor Akbar in the 16th century. Some Bollywood movies like Jodha-Akbar and Mere Brother Ki Dulhan filmed in the Agra Fort. Best time to visit Agra fort is WInter season between Nov to Feb. Tomb of Akbar located on Sikandra sub of Agra. it is built by the Jahangir son of Akbar after the death of Akbar. this place is chosen by the Akbar as his wish tomb is created after his death. there is a very big ground area of gardens and stylish Mughal design tomb. people come here can see the monkey and apes there are many photographers who can take your photos with these apes. the best to visit here in the morning and evening because you can relax and walk in this place and watch beautiful gardens. Mehtab bag is a very good place for photography and if you plan for your wedding shoot video else photography. Mehtab bag has a large area of garden with 300*300 M opposite side of Taj Mahal and Yamuna river. it’s a beautiful spot if you want to see taj mahal from DIstance but there is nothing to do much. we advise you should come here in the morning or evening time. it’s ook awesome during sunset and sundown. this could be your best places to visit in Agra in the evening or morning time. Wildlife SOS has rescued 200 Bears from the place where these bears are torcher to practice for dance. This center of Wildlife SOS runs through the donations and the entry charges are 50 rs for Indian and 500 rs for foreigners. also, these entry fees are taken by the government and not given to Wildlife SOS. if you love the animals you should go to this place and watch this Wildlife SOS in Agra also you can take some beautiful snaps.

Entry Ticket – 50 rs for Indian and 500 rs for foreigners

Moti Masjid is located in Agra and built by Shaha Jahan. Moti

Masjid is built the purpose of the worship for the royal member of Court. it is completed in 1654 and estimated 4 lakh rs spend on that time and it takes 4 years to built and it is also known as Pearl Mosque. it is well managed by the government and the stuff till now it is made by the white marble and it has a very beautiful style and design of the Mughal empire. it is the opposite side of Agra fort and it’s the largest mosque after the Delhi Jama Masjid. Panch Maha is built by the Akbar it has five Flores which stands on each other on the ground it has 84 pillars on the first floor it has 56 pillars on the second floor it has 20 and on the next floor it has 12 pillars and in the end topmost section of this building also called as Chatri has 4 pillars. its structure is very beautiful and attractive. you can take photos under the roofs of this is a place. the good thing is that there are no entry charges.

Imad Ud Daula also called as the Baby Taj Mahal. this building is looked like a draft of Taj Mahal and sometimes it’s also known as Jewel box. Imad Ud Daula artwork and design style are very precious and impressive. it is located on the Yamuna riverside. it’s started in 1622 and completed in 1628. Entry fees are the 20rs for Indian and 200rs for the foreign tourist.

it is a very good place to visit but remember it is not a large place it is a small place but there is a good facility for parking as well. this is the Best Places to visit in Agra if you have a multi-day trip to Agra then you should consider these places to your visit list.