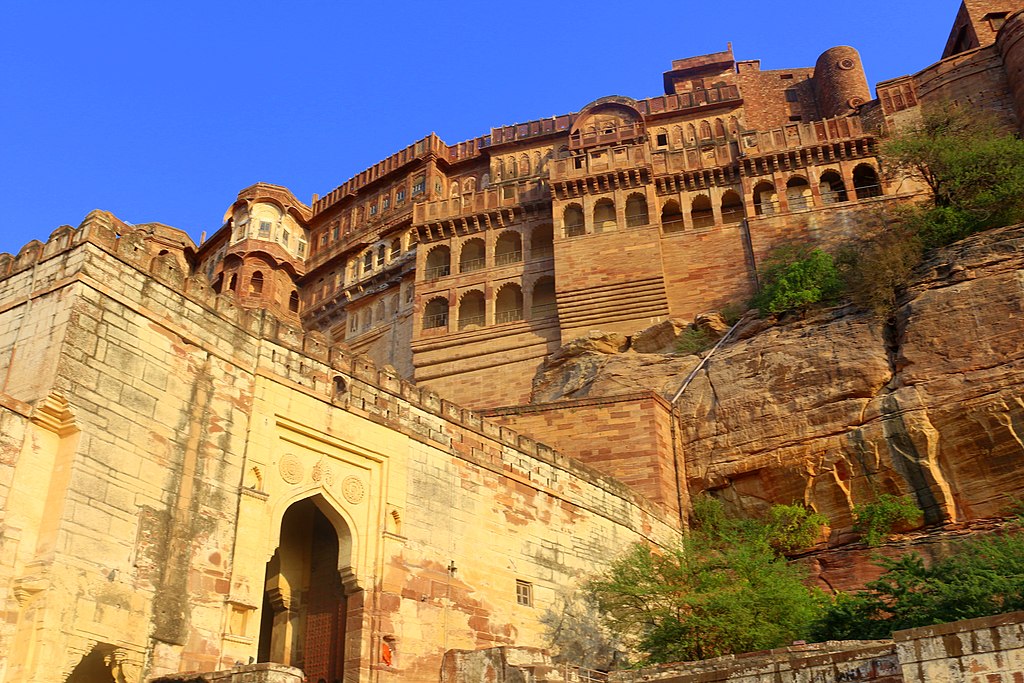 Indian forts are always part of Indian culture and history. Many Indian forts famous for his design so today we talk about Top 10 Forts in India. The Red Fort is a historic fort which is located in the city of Delhi in India. Until 1856, it served as the residence of the emperors of the Mughal dynasty. It is situated in the center of Delhi and has a number of museums. Every year on the Independence day of India which is celebrated on 15 August, the Prime Minister hoists the Indian “tricolor flag” at the main gate of the fort. PM also delivers a nationally broadcast speech from its ramparts. Red Fort was designated a UNESCO World Heritage Site in 2007 as part of the Red Fort Complex. Mehrangarh also known as Mehran Fort is located in Jodhpur, Rajasthan. It is one of the largest forts in India. It was built in 1459 by Rao Jodha. The fort is enclosed by imposing thick walls. Inside its boundaries, there are many palaces renowned for their intricate carvings and expansive courtyards. Mehrangarh Forts comes in number second in the list of Top 10 Forts in India. Gwalior Fort is a hill fort near Gwalior, Madhya Pradesh in India. The fort has many beautiful inscriptions. The fort has been under control by many different rulers in its history. The present-day fort consists of two main palaces, Gujari Mahal and Man Mandir. The Gujari Mahal palace was built for Queen Mrignayani and is now an archaeological museum.

Jaisalmer Fort is situated in the city of Jaisalmer, Rajasthan. It is believed to be one of the very few “living forts” in the world, as around one-fourth of the old city’s population still resides within this fort. Jaisalmer Fort is the second oldest fort in Rajasthan and was built in 1156 AD by the Rajput Rawal (ruler) Jaisal. It stood at the crossroads of important trade routes. Golkonda is also known as Golconda fort is situated in Southern India. It served as the capital of the medieval sultanate of the Qutb Shahi dynasty and is situated 11 km west of Hyderabad. This region is well known for the mines that have produced some of the world’s most famous gems like the Koh-i-Noor. The fort is right next to Kangra town. This fort stands on a steep rock in Purana Kangra. It dominates the surrounding valley and is built strategically at the “Sangam” of Banganga and Majhi rivers. It is believed that Kangra belongs to the one who owns the fort. Near old Kangra is the famous Jayanti Mata temple on a hilltop. The Chittor Fort is among the largest forts in India. It became a part of the UNESCO World Heritage Site in 2013. The fort was the capital of Mewar. It is located in the town of Chittor. It is spread over an area of 280 ha above the plains of the valley drained by the Berach River. The fort comprises of several historical palaces, gates, temples, and two prominent commemorative towers. Chittorgarh Fort comes in number Seven in the list of Top 10 Forts in India. Panhala fort literally means “the home of serpents”. It is located in Panhala, in Maharashtra, India. It is strategically located near the Sahyadri mountain range which was a major trade route. Due to its strategic location, the Battle of Pavan Khind took place. Several parts of the fort after so many years are still intact. Srirangapatna Fort is located in Srirangapatna, the historical capital city in the South Indian state of Karnataka. It was built by Timmanna Nayaka in 1454. The fort came to prominence during the rule of Tipu Sultan. The fort was modified to meet the growing needs of saving against invaders. The fort is surrounded by River Kaveri on one side. The Fort comprises seven outlets and two dungeons. Amer Fort is located in Amer, Rajasthan, state of India. Located high on a hill, it attracts lots of tourists in Jaipur. The town of Amer was ruled by Raja Man Singh I. Amer Fort is very well known for its artistic style elements. With its large ramparts and series of gates and cobbled paths, the fort overlooks Maota Lake. This lake is the main source of water for the Amer Palace. Fort is constructed with red sandstone and marble. last Fort Amber Fort comes in number Ten in the list of Top 10 Forts in India.